Here we will refer to one of the advantages relating to the graphical interface be able to make bends in tracings of the pipes.

In watdis polyline curves can be drawn between two nodes of a stretch. The polyline is transformed into a single pipe whose initial node matches the first end of the polyline and the end node coincides with the termination of the polyline. Here in red an example of a polyline between nodes C4 and C5. The inflections of the polylines are done with a simple right click of the mouse.. 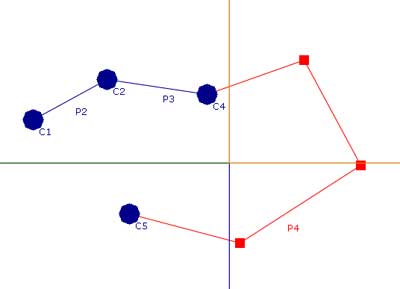 This simplifies the model, since in the inflections there is no need to place additional nodes, as in epanet for example. So if you put a background image with the streets, and some of the streets are curved, in watdis you can trace the lines with inflection points without placing nodes, and nodes placing is only required in the corners of intersection or nodes where demand exists. The length is calculated as the total length of the polyline.